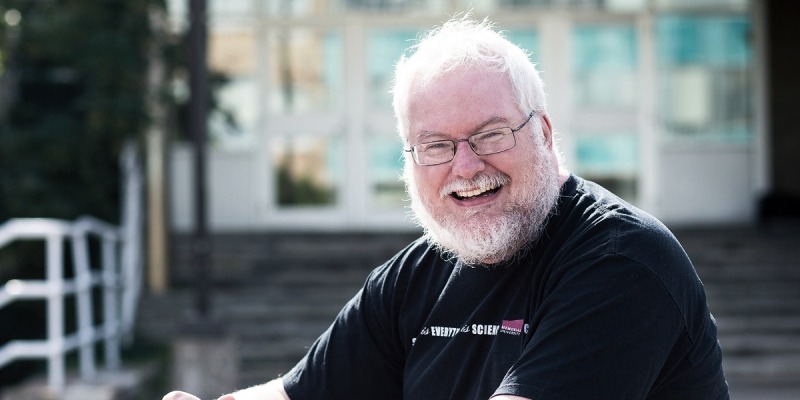 On the first day of his graph theory class, Dr. Danny Dyer starts by handing out a recipe for apple pie.

Why would an associate professor in the Department of Mathematics and Statistics want students to think about pie?

“Everyone has seen a cookbook,” said Dr. Dyer. “It’s a series of step-by-step instructions. But, that’s also a classic example of an algorithm.”

With real world examples like that, Dr. Dyer, who was the inaugural Chair in Teaching and Learning for the Faculty of Science, and who received the President’s Award for Distinguished Teaching in 2016, hopes to capture the attention of students and get them thinking about mathematics in new and exciting ways.

He recognizes that not all his students want to be there.

“Basically, I’m trying to convince them, ‘See, this is not so bad. Really,’ he said. “When I teach Math 1000 (Calculus I), I know a lot of students are just trying to get through it. They come in with very different abilities and interests, and while I can’t make them better at mathematics, I believe I can increase their interest.”

That thinking led him to redesign Calculus I, turning it from a typical math lecture course into one that employs a flipped classroom approach, requiring the development of new learning resources including fill-in-the-blank notes, worksheets and videos.

Dr. Dyer and his students now spend class time working together to solve math problems — in keeping with his philosophy that one learns math by doing it.

His efforts have been met with rave reviews from students and have now been recognized outside the walls of Memorial’s classrooms.

Dr. Dyer was presented with the 2017 Association of Atlantic Universities (AAU) Distinguished Teaching Award on Sept. 21, in honour of the work he has done to provide students with the best opportunity for success, and for the positive effect he’s had on teaching and learning in the wider university community.

The AAU is made up of the 16 universities in the Atlantic region and in the West Indies. It presents up to two awards annually in recognition of excellence in university teaching over a number of years, primarily at the undergraduate level.

“I was ecstatic to get Memorial’s Distinguished Teaching Award and was very pleased to be nominated for the AAU award,” said Dr. Dyer. “Getting it was just icing on the cake.”

He credits his success to the challenge he faced when he lost his Natural Sciences and Engineering Research Council grant.

“That really knocks you back on your heels; I know personally I found it very demoralizing,” he said.

“I was lucky in the sense that I had graduate students and got support from the dean’s office to maintain them, so I could keep doing the research I was interested in. But a large part of every faculty member’s job is teaching; I guess it’s natural that I started to think about it more.”

“Teaching is some of the best public relations we can do.”— Dr. Danny Dyer

He notes that teaching is one of the main ways the university interacts with the general population of the province and aligns with Memorial’s special obligation to Newfoundland and Labrador.

“Teaching is some of the best public relations we can do,” he said.

“For students who are in our classrooms for the first time, and for some it may be the only time, it’s important that we put our best foot forward and give them an experience that’s worth remembering. To show them that science is not only interesting, it’s beautiful and exciting.”

Allyson MacNeill-Hajek, instructional design specialist with Memorial’s Centre for Innovation in Teaching and Learning, has served on the AAU Coordinating Committee on Faculty Development for over a decade and is its current chair.

The committee is tasked with choosing the distinguished teaching award recipients, who must show strength in certain key areas.

“We believe a distinguished teacher is also enthusiastic and influential,” she said. “So, there’s got to be some evidence of an influence on teaching and learning beyond their own courses and the students they interact with. We saw that in Danny’s dossier for sure.”

“Dr. Dyer’s dossier reflected a well-rounded involvement in teaching and a concern for the success of every student.”— Allyson MacNeill-Hajek

Ms. MacNeill-Hajek says the committee was impressed with Dr. Dyer’s efforts to be the best teacher he could be — reflecting on his own teaching, paying attention to student feedback, collaborating with colleagues and looking at the research on flipped classrooms and engaging students.

“The committee applauded Dr. Dyer for his initiatives as the Chair in Teaching and Learning, for his work with the university’s First Year Success program and for his outreach activities which include being the mathematics faculty advisor for SHAD Memorial – in these roles he had influence on teaching and learning beyond the math department and the Faculty of Science,” she said.

“He’s also done a lot for graduate students, helping them to be successful in academia and in applied research by providing opportunities to develop their teaching and communication skills. Dr. Dyer’s dossier reflected a well-rounded involvement in teaching and a concern for the success of every student.”

Ms. MacNeill-Hajek says there are many excellent teachers at Memorial and the members of the committee would like to see more people nominating individuals for internal awards.

“While it can be an onerous process to develop a strong nomination, my department can offer support and give feedback on the nomination file,” she said.

Dr. Dyer received his Distinguished Teaching Award at the September 2017 meeting of the AAU Council and will present a plenary session with his fellow award recipients at the 2017 Atlantic Universities’ Teaching Showcase held at Mount Saint Vincent University on Oct. 14.